New writers tend to run from structure, but structure is essential for a successful story. To the experienced writer structure is an old friend, a calming pill, a money spinner. This post presents a free-form approach to structure that will appeal to both pantsers and planners. 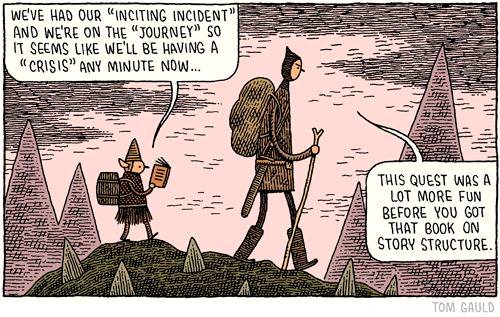 NaNo is National Novel Writing Month and it takes place every November. Writers all over the world commit to writing 50,000 words in a month. The planners plan what they are going to write and the pantsers start writing on the first of the month “by the seat of their pants.”

In 2013, I pantsed a pile of 60,000 words called Dirt. It has some great stuff in it. Stuff I cannot believe came from my brain. That’s the great side of NaNo, it pushes writers into areas they normally would not go. The downside; I’ve spent the last two years trying to turn the 60,000 word pile into a novel.

My hope was the hope of pantsers everywhere—magically the story will happen. It didn’t. It rarely does.

Very few novels from NaNo make it to publication. The ones that do are usually from experienced writers who fall into the planner category. Dirt, as with many pansted novels, needs structure—desperately. It has the potential to be a marketable novel if it’s turned into something other people can understand. It fits firmly into a popular genre, Young Adult Fantasy, and is different from anything in that genre.

Structure is not my strong suite. I know it. Character and emotional truth are my stock and trade, but I know they are worthless without a strong structure to hold them.

Structure is the great translator between the writer’s brain and the reader’s brain. It is not the creativity crusher many believe it to be; it can free and inspire the imagination.

Being a playwright, I use three act structure. Dirt, being a novel, I was unsure how to apply three act structure to it. (I did consider re-writing it as a play.) Plays are an arrangement of actions that express themselves through dialogue and movement on a stage in under two hours in front of a live audience of several hundred people. Novels are actions expressed exclusively through words that occur over several hundred pages and play out slowly in a reader’s mind over several days and weeks in a number of locations. Novels are more intimate and introspective than a play. Straight three act structure may not be enough. 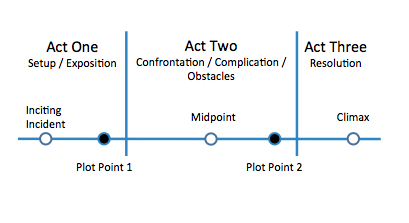 The Paradigm of Three Act

I looked to other writers for help. A structure system that wasn’t academic or theoretical and made sense to me was what was needed. YouTube has lots of videos on how to write a novel. The webinar “Novel Revision: Craft a Story Readers Can’t Put Down” with James Scott Bell and produced by Writer’s Digest, stuck with me over several days. I liked Bell’s casual, non-anaylitical approach to structure.

I purchased his book “Super Structure” and in it he talks about Doorways of No Return, Care Packages and Mirror Moments and not plot points and French words I can’t spell. The clincher,  it’s based on my old friend—three act structure.

“Super Structure” shows the scenes a novel requires that a play does not. Bell lays out 14 signposts along The Paradigm of Three Act Structure that are very helpful for structuring a novel and brainstorming scenes for it. For example, The Mirror Moment. This scene almost always occurs in the middle of the novel. In straight three act structure it is usually called, unhelpfully, The Midpoint. There are various explanations of what the Midpoint should be. Some say it’s when the Lead sets out on a collision course with the villain. Some say it’s the starting point of Plot Point II. Some say it’s where a change takes place.

Bell helpfully designates it The Mirror Moment. It is when the Lead asks who am I and what am doing? Figuratively facing themselves in a mirror and disliking/liking what they see. Remember the Lead must transform or not in some way during the course of the story. The Mirror Moment is where the transformation begins; they must change or die. Knowing this scene is very helpful structuring, or in my case re-structuring, a novel.

I’m not going to explain all the signposts in this post. Read the book, it’s a short book that can be read in one sitting. Here is a list of them:

The Fourteen Signposts from Super Structure by James Scott Bell

What I Know Now

“Super Structure,”  lit a fire under me. I started a Novel Journal which is where feelings and thoughts about your novel are recorded each day. It is used as a guide for what to write next and an aid in identifing areas where more brainstorming is needed. This is more helpful then I can I say. Even when I write three lines of, “I hate this and don’t feeling like thinking about this Damn novel. Should damn be capitalized in that sentence?” it helps to clear my head. Who better to discuss the story with than its creator?

It also helps to think about the characters and story in different moods and places. For example, I never questioned my main character not having a mother around. I had a vague idea what happened to her, but never questioned it. I’m questioning it now. I’m also questioning her relationship with her father. It’s opened more ideas.

The 60,000 word pile I created during NaNo is a gigantic brainstorming session. It was not wasted effort. The characters and the world of Dirt could not have been created any other way. That’s a very good thing. It does not need to be scrapped, it is raw material to build a structure.

I would do it differently today.

My NaNo Plan for All-time

The word count accumulates, there is freedom to change with the wind and at the end of the month there is an organized pile of words along a story arch. This is a much better place to start editing.

This is my plan for re-writing Dirt during NaNo this year. It does not have to be yours unless it makes sense to you. Find a structuring method that makes sense to you and use it as guided brainstorming. It is not cheating to include brainstorming in your NaNo word count, in fact, it is encouraged! You’ll be happier in December if you create some kind of plan now.

I am playing around outlining using the 14 signposts in a application called Scapple developed by the creators of Scrivener. I’ll let you know how it works.

What is your NaNo Plan?

3 thoughts on “Structure: A Free-form Approach”

Cynthia Franks is an award winning playwright and dramatic writing teacher. She owns dogs, cats and a star named OOOOOOPS!